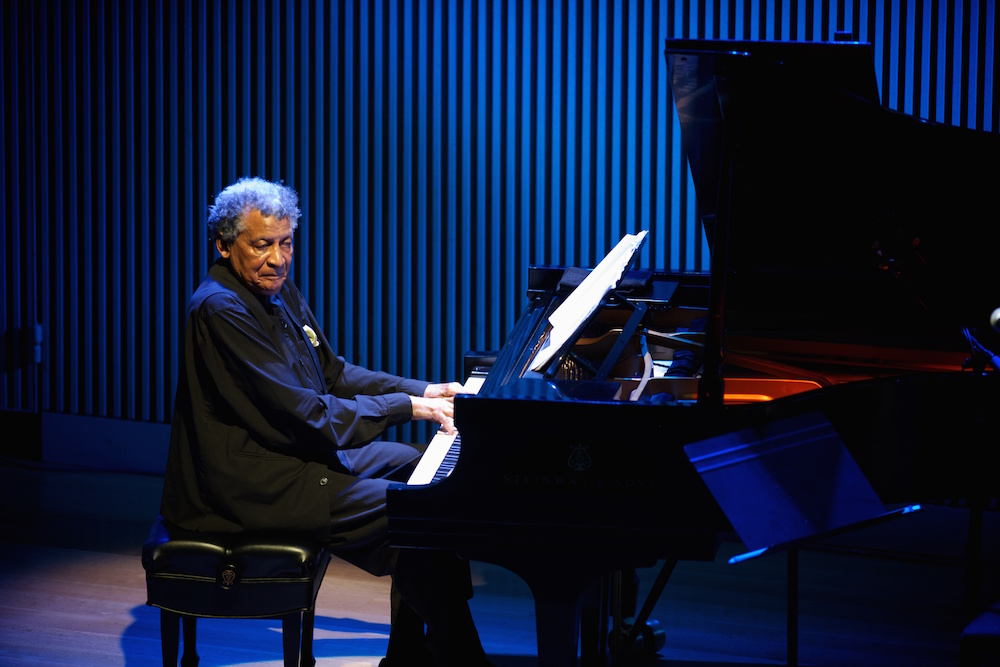 At 81, pianist Abdullah Ibrahim, is still going strong, something he proved during a remarkable tour-de-force performance which spanned four nights at SFJAZZ in San Francisco.

For the first two evenings (Thursday and Friday), Ibrahim appeared in the company of his Mukashi Trio. For these nights, Ibrahim brought together bassist, cellist, and composer Noah Jackson, a Detroit native, and Cleave Guyton Jr. who played flute, piccolo and clarinet.

Ibrahim’s colorful personal history has contributed greatly to his prodigious musical output. Gospel and blues elements in Ibrahim’s playing are clearly evident. He grew up in Cape Town, South Africa where his grandmother was the pianist for the local A.M.E. Church, while his mother led the choir. Christened Adolphes Johnnes Brand, Ibrahim began playing the piano at seven and was soon exposed to such musical influences as Fats Waller. Cape Town itself was a melting pot of styles: tribal music, Chinese, Indian and Islamic music was present, along with American pop and R&B. In 1962, he embarked on a three-decade exile in which he moved between Europe, the U.S. and Swaziland.

After hearing him play in Switzerland, Duke Ellington invited him to record for his Reprise Records, a date which proved to be the first of his sixty-plus recordings. At that time he was still known as Dollar Brand. The story behind this colorful name is said to be that, as a young man in Cape Town, Ibrahim would always carry a dollar in his pocket in the event that he would meet a Black American sailor selling coveted jazz 78s. Following his conversion to Islam in 1968, he changed his name to Abdullah Ibrahim. Since that time, he has produced a plethora of albums and CDs, and has also recorded several soundtracks for films by the renowned French director Claire Denis.

The evenings, both with the trio and, the Saturday and Sunday night dates, featuring his veteran band Ekaya, followed a similar pattern. The accompanying musicians’ names and instruments were announced over the sound system. Then Ibrahim, clad in black, would take the stage and play one of his evocative and flowing solos to open the first of the evening’s two sets. Each evening’s second set would also commence with a virtuoso solo.

Ibrahim mesmerizes onstage. His playing encompasses a multitude of range and tonalities. Some lines are delicate—resembling waves washing up on a beachside cliff—while others conjure up an immense wall of sound structures ranging from aural crystal cathedrals to rhythmic staircases. He builds layer on layer, constructing a polyrhythmic structure on top of a basic foundation. At times resembling a one-man instrumental chorale, at other moments a full orchestra, his playing is lyrical, rhythmic and sometimes percussive. His poignant compositions, which flow from one into another, might be likened to short stories set to sound.

For Saturday and Sunday evenings, Ibrahim brought Ekaya to the stage. Guyton was again present; this time bringing his alto saxophone along to add to the sonic mix; Jackson brought his bass and cello, and four additional excellent musicians joined him onstage.

Ibrahim has always shown tremendous taste in his choice of sidemen. For this date, his veteran band Alex Harding, another young musician hailing from Detroit, proved himself to be a master of the baritone sax and bass clarinet. Once a member of the late Julius Hemphill’s Saxophone Sextet, he has also performed with a remarkable group of artists, including Muhal Richard Abrams, Craig Harris, Lester Bowie, Frank Lacy, Oliver Lake, Greg Osby, Marshall Allen’s incarnation of the Sun Ra Arkestra, the David Murray Big Band and Hamiet Bluiett’s Baritone Group.

The stage then darkened as the Mukashi Trio commenced to play. Some minutes later the remaining members of Ekaya took the stage, clad entirely in black. A gorgeous tenor solo by Lavell, along with Guyton’s delicate flute, interfaced with Harding’s formidable and conversational baritone. An inspired bass solo by Jackson followed. Then Murchison soloed soulfully on trumpet. One skillful phrase on the flute brought the tune to its conclusion. Guyton bowed and pressed his hands together. Then each the musicians took turns, bowing and pressing their hands together, to sustained applause.

A standing ovation from the ecstatic audience brought the band back for still more intense flutistry, formidable baritone, stellar tenor and trumpet. An outstanding bass solo from Jackson, played in tandem with Terrill, wound down the tune and closed the evening. An enthralled crowd made its way to the doors.