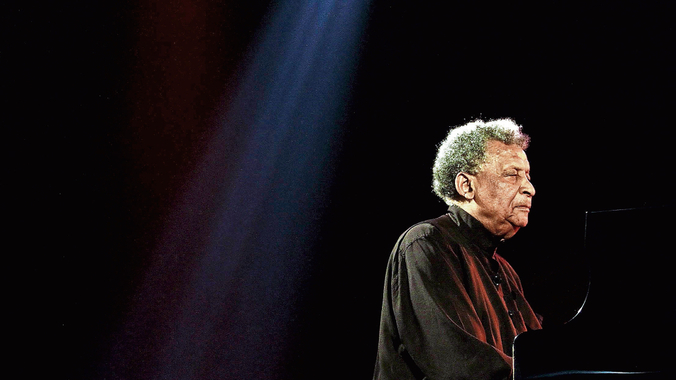 Gifts from a jazz maestro

The email from Abdullah Ibrahim says: “1700hrs confirmed for tomorrow.” I have already drawn up a list of 15 questions for one of South Africa’s national treasures.

At 5pm the next day, we are talking on Skype. With the tone and immediacy of a toddler’s 21 questions, a bright-eyed Ibrahim (81) asks: “Where are you?”

More interesting is where he is. He’s near the mountains, he replies, about an hour away from Munich, where he has finally found the perfect space for his equally perfect Fazioli grand piano.

His excitement is palpable.

“It’s a dream come true. I’ve known Paolo Fazioli for many years. Last year I did a concert at his concert hall. It’s quite amazing, watching the care and the energy he puts into creating an instrument. It’s a wonderful instrument. It responds to wherever you want it to go and then some.”

A Fazioli is the Whitney Houston of pianos. Ibrahim is working on adding a Fazioli to his collection of pianos in Cape Town. Meanwhile, he’ll rely on his Yamaha or Petrof to hypnotise the audience at Maynardville in Cape Town on December 18.

Officially, this gig is what the interview is about. But it’s really an excuse to pick a great mind. So we talk about university fees and he agrees that they must fall, though he does not say that in so many words.

“In my travels over the years, I have found these problems exist throughout the world. It’s not just South Africa. It’s a universal problem. It’s not something new. The economic dynamics have changed. We have to address that,” says Ibrahim.

The father of musicians Jean Grae and Tsakwe Brand brings the fees conversation to his own doorstep.

“I’ve had many discussions about the pros and cons of jazz festivals with George Wein [American jazz promoter and producer], who started the first one in Newport. I said: ‘Well, a jazz festival comes once a year, and then what?’ Especially for young musicians and students. They are in debt repayment for the rest of their lives and beyond.

“I have young musicians in New York who are playing with me now and several of them can’t sustain themselves, they can’t eat a good meal, because they are in study-loan repayment for the rest of their lives and even beyond that, because the fees are exorbitant.”

Liberating music for the people

Ibrahim believes music still has the potential to make a positive contribution to society in the time of #FeesMustFall, as it did during the struggle against apartheid.

“When I started playing music, I never thought about jazz or about liberating music. It was just a beautiful experience I was having. I asked how it could enhance and make me a better person, and through that I could possibly be of assistance to others. This gift is about how you can use it to assist others. I have no agenda other than to perfect this process that I’m doing and, in that way, I can assist others.”

Jazz’s historical role in society, I note, forces today’s young jazz artists to negotiate between the independence of doing whatever you want and the responsibility of doing what is necessary in society.

His response is an explanation of the beauty of telling our own stories. At this point I’ve learned that very few of this Zen student’s responses are direct.

He opens his eyes wide as he tells a story about a trip with one of his favourite people: “I was with Kippie [Moeketsi] in Swaziland, and we were practising during lunchtime when we heard this flute. We all ran out. There was only a watchman at the garage. He had a piece of plastic pipe with no finger holes – just open at the back and front. He was playing so many octaves!

“That’s traditional music. It’s like storytelling. When you hear the music and you hear what the musicians are doing, then you realise how sophisticated it is. You have to improvise, use your own letter, create your own sentence. The narrative is told when the song is done. Jazz music is immediate, with so many experiences and so many stories.”

Where it all started

I remember that this interview is about an upcoming gig and ask about the meaning of performing in Cape Town. Until now Ibrahim’s responses have been thought out. But now he begins to speak in almost incoherent lists.

“Hometown. This, for me, is where it started. My playing at home when I was seven and my grandmother encouraging me to learn to play music; [my] starting composing, and this wealth of experience I gained in genres of music and cultures. I was exposed to everything. I studied everything. I wrote songs about people.”

He gets so excited that he can’t decide which story to tell.

“We used to write music in the cemetery, because that’s where the police would not look for you.

“We were playing in Cape Town once and [jazz trumpeter] Thabo Mashile got up and took a solo – 12-bar blues. I’ve never heard anything like that in my life before. People stopped dancing. The band couldn’t finish because we were in tears. We asked him what happened during the break. He told us his place caught fire and he lost everything. His horn was all he had. He put everything in that.”

Such memories make Ibrahim nostalgic. In an almost childlike way, he just wants to play for the people he loves.

“Sathima [Benjamin, his late wife], wonderful musicians. My wonderful kids, [my daughter] Jean Grae and my son Tsakwe in Jo’burg. These are people you want to give back to. Then there are my teachers in Cape Town – they are unsung heroes. They refuse to be recognised.