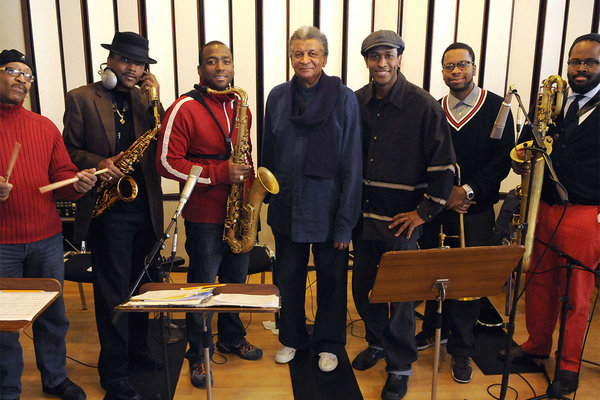 Saying so much with so little

Not a single word escaped the lips of Abdullah Ibrahim during his 90-minute performance at Montgomery County Community College on Saturday night. Perhaps that was intended to maintain the spell that the South African pianist/composer cast over the audience, which was mesmerizing; or it could just be his wont, given the fact that his six-piece band, Ekaya, was cued not verbally but through hints in the piano solos that bridged each piece to the next.

The concert began with the 81-year-old jazz legend entering alone, dressed head to toe in black, and playing unaccompanied for about 20 minutes. Solo piano has made up a significant portion of Ibrahim’s career, dating to the 1960s, when he was still working under his original name, Dollar Brand. Though he’s best known for the Marabi-derived “Cape Jazz” grooves that made him an icon of the antiapartheid struggle, it’s alone at the keyboard that he seems to make his most personal statements.

Those two parts, along with his chamber-leaning compositional side, were on all display Saturday. The nearly nonstop performance flowed between solo interludes; septet pieces that showed traces of Ibrahim’s Cape Town roots or Ellington influences; chorale compositions for which the composer sat out and watched his four horns meld their sounds; and elegant miniatures for piano, flute, and cello.

Ibrahim’s solo intro set the evening’s tone. Tranquil and terse, crystalline but laced with a deep blues feel, it epitomized his style. Never one for pyrotechnics, he says much with little, luxuriating in melody until a sudden harmonic shift or sharp stab of dissonance sends ripples through the formerly placid waters of his sound. Thus he synopsized the concert, which even in its most vigorous full-band moments maintained a hushed solemnity.

Flutist Cleave Guyton and cellist Noah Jackson (who later picked up the alto sax and bass, respectively) then entered to essay some of the pieces from Ibrahim’s 2014 album Mukashi. Summoned by some snippet of melody from the bandleader’s fingers, the remainder of Ekaya emerged with pieces from Sotho Blue, the band’s 2010 release.

It was thus more than half an hour into the concert before baritone saxophonist Marshall McDonald unleashed the evening’s first traditional jazz solo, a sudden eruption of familiar swing that seemed to allow the crowd to breathe for the first time since Ibrahim’s first, commanding notes.

— Shaun Brady, for The Inquirer