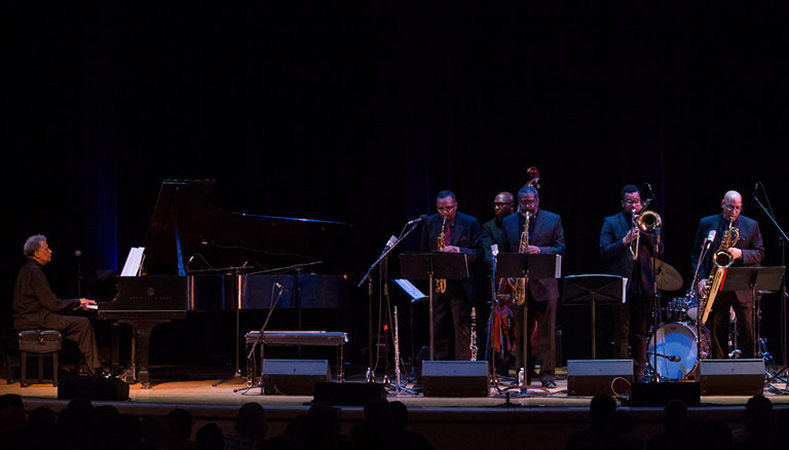 Review: Abdullah Ibrahim Revisits the Past at Town Hall

Since leaving South Africa in the early 1960s to escape apartheid and pursue an international career, the jazz pianist Abdullah Ibrahim has made music with a sense of tenuous suspension. You could say his is a gospel of near-deliverance.

Mr. Ibrahim’s stark pianism and gently rapturous compositions are steeped in the bright harmonies and bouncing rhythms of his native Cape Town, and they seem to suggest that escape or transcendence could almost be possible. But then there’s the inevitable longing for home, for harmony, for rest. He lives in that balance.

The Jazz Epistles, the group Mr. Ibrahim joined in 1959 along with the trumpeter Hugh Masekela, were thinking about something different: more period-specific, another kind of fantasy. South Africa’s first known bebop band of black musicians, the Epistles became a flash sensation partly because they posited a connection between Africa’s struggle for freedom and the urbane futurism of American jazz. (Equally important, they helped open the door to other, more fluidly integrated forms of South African jazz, played by artists like Eric Nomvete and Louis Moholo.)

Mr. Ibrahim’s performance on Thursday at Town Hall with his band Ekaya was the first revival of the Jazz Epistles’ repertoire since the group disbanded 57 years ago. It was to feature Mr. Masekela alongside Mr. Ibrahim in a rare joint performance, but the trumpeter suffered a fall on tour, and was unable to appear. The young South African trumpeter Lesedi Ntsane, who lives in New York, took his place and the show went on. (It was taped for a future episode of NPR’s “Jazz Night in America.”)

But Mr. Ibrahim showed only a passing interest in his old repertoire. After a short opening set by the South African vocalist Dorothy Masuka, he arrived onstage alone, playing a commingled medley of original pieces with wistful shards of “Did You Hear That Sound” and “The Mountain.” Playing softly, he let transitional harmonies linger until well after he had cleared a landing, so that resolution seemed to emerge from underneath a cloud.

After readings of two more originals, featuring lovely work by Cleave Guyton Jr., on flute and clarinet, and Noah Jackson, on cello, the full band emerged – eight musicians in all, including Mr. Ntsane. Mr. Jackson switched to bass and started to walk a fast, swinging line. Mr. Ibrahim faded almost immediately into the background, then disappeared completely as the horn section played “Vary-oo-Vum.” It’s a heaving, keyed-up Ibrahim composition that becomes a 12-bar blues in the solo section: classic bebop, rendered faithfully.

The group went on to play three more Epistles tunes, and Mr. Ibrahim hardly touched the keyboard. (He did offer a tasty polyrhythmic pattern on “Scullery Department,” slightly richer than the cross-rhythm he plays on the original recording, but that lasted just a few bars.)

The group played the Epistles pieces at a striding clip; each time, the teetering melodies dotted with rhythmic hits opened up into tidily swinging solo sections. Only Mr. Ntsane, the guest trumpeter, refused to accommodate the idiom, playing with a thick, smoky lassitude and pulling against the hopped-up swing.

Ekaya returned to its typical set-list for the second half of the set. New life came into the room. Fans of Mr. Ibrahim are likely to be more aware of his standard repertoire than the music of the Jazz Epistles, yet there was greater intrigue and possibility around the more familiar work.

After finishing the Epistles set, Mr. Ibrahim began the wafting original “Sotho Blue” on solo piano, a few bebop skitters giving way to impressionist arpeggios. The horn section glided in, holding liquid tones out above him, its melody a drifting query. There was darkness and suspense, and a sense of broad expanse.