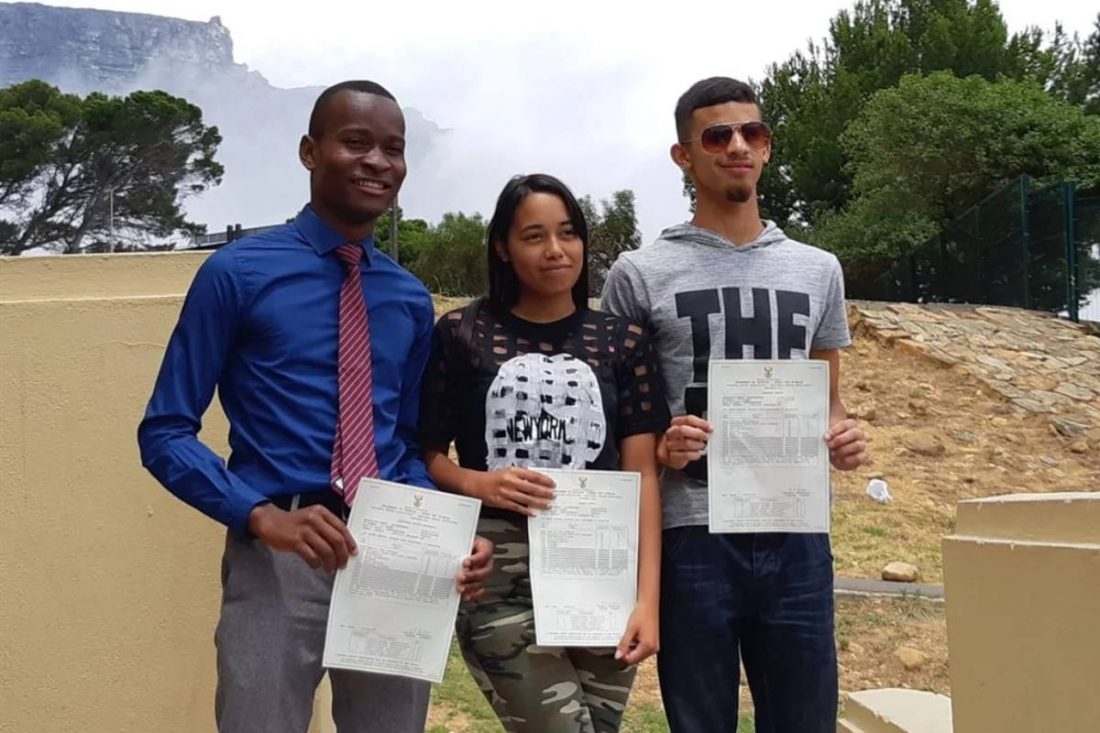 “It was a beautiful year,” said Trafalgar High’s Treatwell Pamhidzayi, waiting anxiously in the hall of the historic school in Cape Town’s District Six for the 2019 matric results on Wednesday.

When a siren went off dramatically to signal the big reveal, the matric class of 2019 shuffled nervously to the desks set up in front of the stage to collect the envelopes containing their results.

Within minutes the old floorboards of the first non-mission school for coloured and black children in Cape Town shook as pupils jumped up and down, hugged, cried, clutched their heads in disbelief, and baby brothers and sisters toddled between their legs bemused by the outpouring of emotion.

“I am extremely happy,” said Kurt Gribble, whose face changed from deeply anxious to joyous in seconds.

He ran to friends Ziyaad Birch and Muzzamiel Barendse and the three celebrated with handshakes and back slaps.

A long line of social justice activists such as Cissie Gool, the first coloured woman to be admitted to the Cape Bar, were also schooled there.

They are valorised in banners draped on the walls with their names and an enlarged photograph.

When the apartheid government ordered the eviction of black and coloured people to the Cape Flats, their attempts to close the school and revamp it for white children’s education were resisted.

Pupils simply did the long commute, and this tradition has continued over the decades since it was opened in 1912.

District Six is coming full circle after the Zonnebloem area was officially renamed in December and plans are afoot to right the wrongs of the apartheid era race-based evictions in the area.

It has not been easy for many of the pupils, with families also dealing with grinding poverty and in some cases homelessness as a consequence of parents’ work closing down.

Pamhidzayi, who wore a buttoned shirt and tie for the occasion of collecting his National Senior Certificate, travelled to school every day from Philippi East.

“It was difficult. I caught a train, then a taxi, and towards the later years, a bus.”

His peers pointed him out as the “brainy” one.

Treatwell Pamhidzayi of #TrafalgarHigh in #CapeTown paid tribute to the school for all the support and guidance towards getting a good #Matric2019 result. Coming in from Philippi every day was tough but the pupils encouraged each other. Plus the teachers are "cool". (@itchybyte) pic.twitter.com/jEFXUwQQhy

Ayabulela Sidinile said he was too shocked to take it all in properly but he hopes to pursue law studies.

“Most people tell me that I could fit into law because I like debating, I like solving problems,” he said.

Lauretta Mbelu and her mother Mami Muleka from Kensington were delighted.

Mbelu wants to study for a Bachelor of Commerce degree if she can. “I’m so blessed,” said her mom.

Lauretta Mbelu and mom Mami Muleka were a bit anxious about #matric2019 but they had nothing to worry about. Lauretta said she did well. Her mom was over the moon for her when she got her results. @TeamNews24 pic.twitter.com/hbmsvsx0fq

Physics teacher Anwar Samsodien, who has been at the school for 21 years, said: “Physics is not easy but I’m really proud of them.”

At the school, 84.4% of the pupils who wrote matric passed.

Mrwebi Magugu, headmaster of Langa High School, said they achieved a pass rate of 71.8%, with their star subject being Geography.

Standing near the school’s motto “Enter to Learn, Leave to Serve”, was Sinalo Sabata, whose dad Phakamisa Malindi teaches English at the school. She attended Groote Schuur High School in Newlands.

She said her father never put pressure on her and she aced matric with two distinctions. Her advice to the matric candidates of 2020 is: “Work hard from the get-go.”

Like no pressure, but Sinalo Sabatha's dad Pakamisa is a school teacher at Langa High School in Cape Town. She got two As at Groote Schuur High in Newlands for #Matric2019. Her advice for the class of 2020 is: "work hard from the get-go". @TeamNews24 pic.twitter.com/4GaSRGBwrN

Pippa Bester and Melissa Spangenberg were all smiles as they left Hoërskool Jan van Riebeeck in Gardens holding their coveted National Senior Certificate.

They were among the pupils who contributed to the Afrikaans-medium school’s 100% pass rate.

Their mothers Sharon Spangenberg and Louise Bester said they had made it very clear to their daughters that they had to take responsibility for their own planning, with no late-night dashes to the supermarket for project paper. And it had all paid off.

This article was originally written for News24 by Jenni Evans