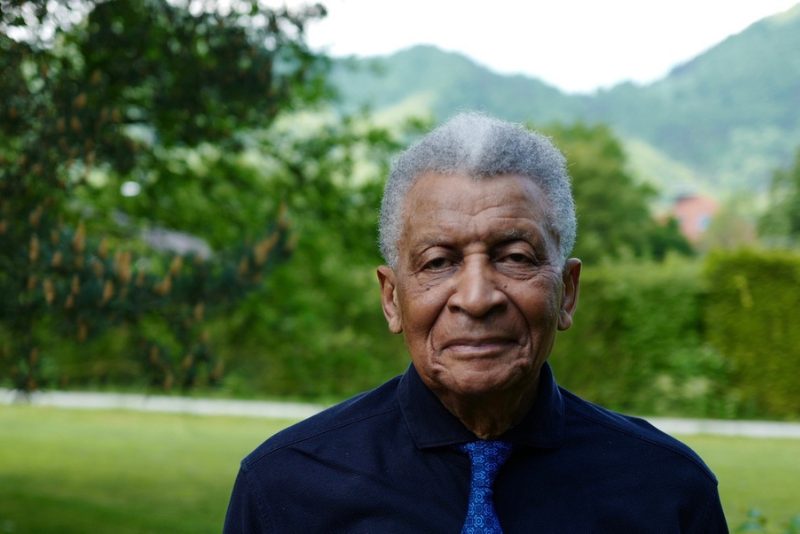 Abdullah Ibrahim is South Africa’s most distinguished pianist and a world-respected master musician.

Born in Cape Town, Dollar Brand, as he became known, was exposed to a melting pot of cultural influences: African traditional music, Christian hymns, gospel tunes and spirituals, as well as American jazz, township and classical music. Out of this blend of the secular and religious, the traditional and the modern, Abdullah Ibrahim’s distinctive sound and musical vocabulary was born.

His grandmother arranged for him to have piano lessons at the age of six. She was also a founding member of the AME church, a branch of the original church in Philadelphia, USA. His mother was the church pianist and played piano for silent movies at the local cinema.

The restrictions of access to the learning establishment forced the young knowledge seeker and budding composer to spend hours and days at Cape Town libraries reading and studying all inclusive works of global masters in culture, music, philosophy and world history.

Abdullah made his first professional debut at age fifteen playing and later recording with the Tuxedo Slickers a big band in Cape Town inspired by Erskine Hawkins, Birmingham, USA. He also played piano with the local Cape Town dance bands, vocal groups and saxophone with the Minstrel Carnival.

In 1958 he created his own “Dollar Brand Trio” showcasing his original compositions as well as those of Jazz Masters.

They recorded Jazz Epistle, Verse 1 – the first jazz album by black South African musicians. Abdullah Ibrahim says: “We were inspired by American jazz musicians and popular songs but most importantly the legitimacy and vibrancy of our own African tradition…. My earlier influences were Thelonious Monk… and prior to that Albert Ammons and later Herby Nichols.”

Due to the strict apartheid laws and increased government harassment of musicians, the notorious Sharpeville massacre 1960 and subsequent imprisonment of Nelson Mandela, Dollar Brand left the country with his partner and vocalist Sathima Bea Benjamin and moved to Switzerland. They were joined later by the other trio members Gertze and Ntshoko and took up a three-year contract at the Club Africana in Zürich. Here the young musicians had the opportunity to meet many USA jazz musicians in concert in Zurich, John Coltrane, Art Blakey – Jazz Messangers and many more. Max Roach and his project Freedom Now with Abbey Lincoln was an important concert and meeting. This led to later duo concerts with Abdullah Ibrahim and Max Roach notably at Carnegie Hall, the first ANC cultural event in the USA.

Abdullah Ibrahim’s later move to New York in 1965 further cemented his career as a leading musician – interacting with musicians such as Don Cherry, Ornette Coleman, John Coltrane, Carlos Ward, Billy Higgins. He performed three times as sub-pianist with the Ellington Orchestra and toured with the Elvin Jones Quartet.

In 1967 he received a Rockefeller Foundation grant to study privately with Professor Hall Overton of the Julliard Music School. As an arranger Overton created some of Monk’s compositions for large ensemble, notably the Monk’s Town Hall concert.

The year 1968 was a turning point. Searching for spiritual harmony, Dollar Brand went back to Cape Town, where he converted to Islam, taking the name Abdullah Ibrahim.

In 1974 in Cape Town he recorded Mannenberg – Is Where It’s Happening, which became the unofficial national anthem for black South Africans in the struggle. After the Soweto student uprising in 1976, Abdullah Ibrahim and his family returned to New York. In the 1980s he created a range of artistic projects – notably The Kalahari Liberation Opera (Vienna 1982). In the 1980’s Sweet Basil Jazz Club in New York, one of the most vibrant venues showcased many musicians.

In 1990 Mandela, freed from prison, invited Abdullah Ibrahim to come home to South Africa. He memorably performed at Mandela’s inauguration in 1994, where Mandela said about Ibrahim: “Bach, Beethoven, we have better!”

Abdullah Ibrahim has composed several scores for film including the award-winning soundtracks for: Claire Denis’s Chocolat (1998), No Fear, No Die (1990) and Idrissa Quedraogo’s Tilai (1990). He was also featured in the 2002 production Amandla which he named: A Revolution in Four-Part Harmony.

Over the years in addition to composing and performing – Abdullah Ibrahim has created – his – “Vision”- an integral functional platform of his experiences as musician, holistic lifestyle and life long endeavour to pass on his knowledge to young generations: The Green Kalahari Project in South Africa.

Abdullah Ibrahim has received many acknowledgments and honorary doctorates for his life’s work including NEA Jazz Master 2019.

A 2019 new album, The Balance with Ekaya reached #3 in the US Billboard jazz charts. In the same year 2019 Solo album – Dream Time

In the same year he gave a truly memorable performance at the Kamigamo Shrine in Kyoto, Japan. In 2020 Abdullah Ibrahim was one of the foreign recipients of the 2020 Spring Imperial awards “The Order of the Rising Sun” conferred by His Majesty, the Emperor of Japan, in recognition of his lifetime achievement in emancipating the people of South Africa and the world through his music, as well as his contribution to Japan-South African friendship through his works, performances and profound understanding of Japanese culture and spirituality.

For over fifty years Abdullah Ibrahim has been studying in Japan with Grand Master Tonegawa san – the ancient tradition of – koryu budo – your life’s journey. His most recent album Solotude, recorded on the pianist’s birthday amidst the coronavirus restrictions of autumn 2020, Abdullah Ibrahim remains at his zenith as a musician and as a tireless initiator of new projects. Abdullah Ibrahim is currently residing in South Africa and Germany with his partner Dr. Marina Umari, paediatric orthopaedic doctor and osteopath. Fazioli Grand Piano his first choice.