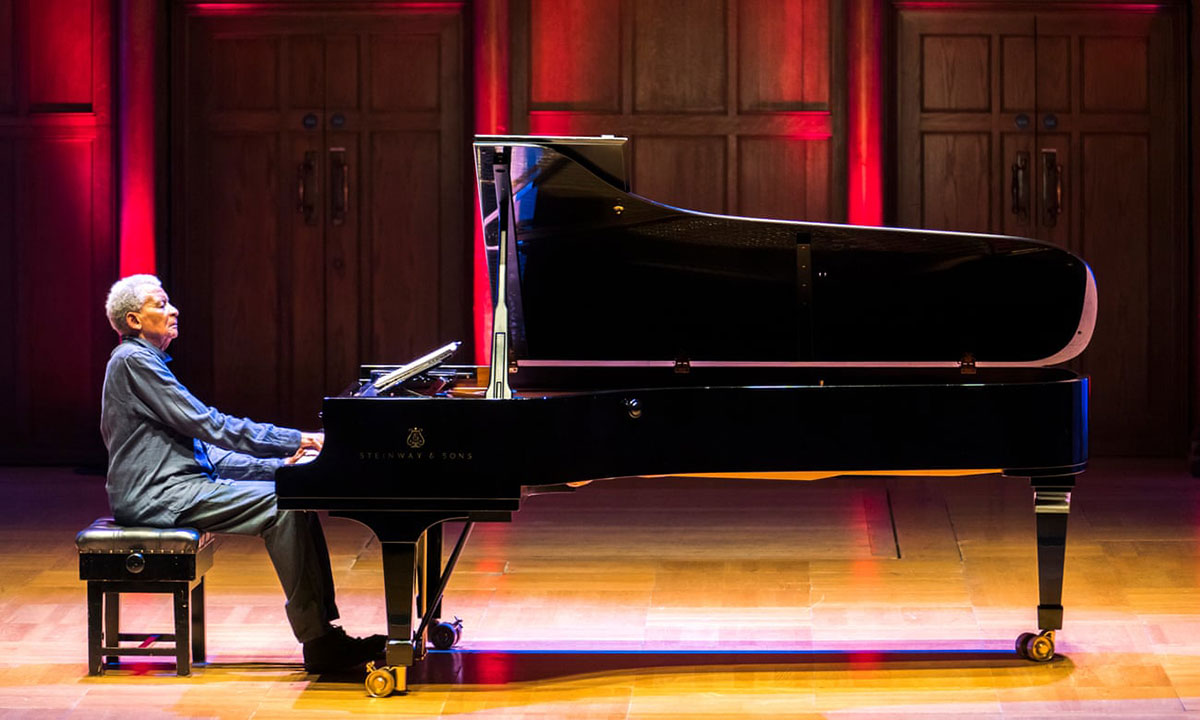 here is a quality to pianist Abdullah Ibrahim’s music that makes it sound like a slow, sad goodbye. That may be because he spent the majority of the 1960s to the 1990s in self-imposed exile from his home country of South Africa – a protest against the racial segregation of apartheid – or it may be to do with the soft, downtempo way he picks out each note hunched behind his grand piano, improvising as if he is forever playing towards the end of a phrase.

Now 84, Ibrahim has had a more varied career than most, pioneering the “Cape jazz” style of the 1960s, heavily influenced by the likes of Thelonious Monk and Duke Ellington, before moving to New York to collaborate with Ellington himself and even leading the Duke Ellington Orchestra under his previous stage name, Dollar Brand, then converting to Islam, then returning to South Africa in the 70s to write Mannenberg, which became one of the most famous anti-apartheid anthems of the era.

With his horn-heavy band Ekaya, Ibrahim has now taken to playing shows as an elder statesman, opening with a brief solo section before letting his band fly, his direction subtle yet pervasive. He even stands behind his band for their final bows, pushing the younger generations forward insistently. It is a rare and revealing sight, then, to see Ibrahim perform an entire show solo on piano in the imperious setting of London’s Cadogan Hall. He is an artist who has made his career as a writer of ensemble music, finding his strength in harmony; here he barely glances at his sheet music, head bowed as he feels his way instinctively over the keys.

It is emotional music but there is a sprightliness to Ibrahim’s playing, as he bounces gently on his seat and mouths along through his phrases – some of the more guttural vocalisations audible over the hushed reverence of the crowd. It is a show of two halves, yet the work is a single seamless improvisation, a palimpsest of his five-decade career. He channels Monk in bursts of a heavy, repetitive left hand, rhythmically hammering out jarring individual bass notes, while the right plays through freely, touching on shades of Bill Evans’ modality before landing on his own fractal phrasing.

Along with other jazz piano legends’ influence, Ibrahim weaves his own compositions into the tapestry of this recital. There is the plaintive refrain of The Mountain, shades of Sotho Blue, the tender romance of Star Dance and bursts of euphoric major chords and optimism from The Wedding. Each melody is played with due reverence, and then swiftly dismantled into something entirely new: the hallmark of a true improviser, finding pockets of originality without even the need for a response from other players. (There are certainly other pianists in attendance – most notably Zoe Rahman, nodding along and looking keenly for a glimpse of his hands.)

This is a fluid performance, one which flows through its two hour-long halves without feeling as if a single composition has passed to a discernible end point. This performance may have sounded like a goodbye, but it doesn’t feel final. For someone as graciously talented as Ibrahim, there is always much more playing to be done, and more hands and minds to be inspired. Instead, it is an inshallah, a “see you again”.

This article was originally written for The Guardian by Ammar Kalia